Goal Zero makes solar panels in a lot of different sizes. Their more portable panels are for the hikers and backpackers, while their Nomad and Boulder panels are larger and better suited for RV, car, or van travelers.

These portable solar panels are often paired with the Goal Zero Yeti power stations, which basically are 12V batteries with a solar charge controller and an inverter, making them great off-grid solutions for campers. They’re also used by homeowners used to power outages for emergency uses. But how do you charge a 12V battery with Goal Zero panels?

While the Yeti power stations/solar generators are powerful machines capable of powering a lot of things, even my travel trailer, it’s always good to have an additional backup. Regular 12V deep cycle lead-acid batteries are the more common battery found on RV campers, and since we love solar panels around here, wouldn’t it be great to be able to use the Goal Zero panels to charge a battery not made by Goal Zero?

The problem with the Goal Zero solar panels is that they don’t have MC4 connectors or alligator clips, they’re either USB, 8mm, or APP (Anderson Power Pole).

Not only that, but the 8mm and APP panels don’t have a built-in solar charge controller, which you’re going to want between the solar panel and your battery to prevent overcharging.

Goal Zero has released the solution for this, and it’s called the Guardian 12V Plus Charge Controller. 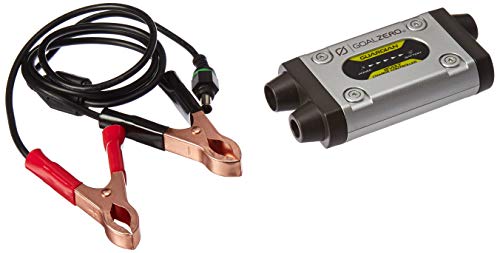 When removing the clips you start with the negative (black) clip, then the positive (red) clip.

What 12V Batteries Does It Support? Lithium?

What If The Goal Zero Solar Panel Has An APP (Anderson Power Pole) Output?

Goal Zero large panels come with an APP output cable instead of an 8mm, then you’re going to need a Goal Zero APP to 8mm adapter.

Note that the Guardian Plus charge controller maxes out at 90 watts.

How Long Will It Take To Charge My RV Battery With A Goal Zero Panel?

It depends on several factors, how big your battery is, and how big the solar panel is are two of them. Then you need the sun to shine.

Generally speaking, a 100W solar panel can generate about 5-6 amps an hour. RV camper batteries are usually around 30-50 amp hours, so in the perfect world, it would take less than 9 hours to charge it from empty to full.

You should never let a lead-acid battery drain completely though, as it damages the battery and reduces its overall battery capacity in the long run. Lead-acid batteries should be kept above 50%.

If your RV/travel trailer batteries are at 50% and you have 100Ah battery capacity, you can expect the battery to be fully charged after about 9 hours in good sunshine.

Can I Combine Two Or More Goal Zero Panels To Charge a 12V Battery?

Yes, you can combine several panels if they have the 8mm output with the use of a Goal Zero 8mm to Anderson x4 combiner. You would then need a Goal Zero APP to 8mm adapter to be able to plug the panels into the Guardian Plus charge controller.

Should I Connect The Solar Panels To The Charge Controller Before Connecting The Battery?

When it’s done charging, disconnect the solar panel from the charge controller, then remove the clips, starting with the negative (black) clip, then the positive (red) clip.

What Are The Best Alternatives To Charge A 12V Lead-Acid Battery With Solar Panels?

The Renogy briefcase would recharge the batteries in the same amount of time unless you go with the larger Renogy 200W briefcase panels which would double the charging speed.

Renogy’s 200W configuration is quite heavy though at almost 40 pounds. But if you go camping for a week at every place, you can set them up when you get there, leave them out, and take them down when it’s time to go, so the 40 pounds might not be too much of a burden to you.

A great feature with the Renogy panels mentioned above is the charge controller that lets you monitor your battery and solar charging.

If you have any questions, feel free to leave a comment down below.