Is The Goal Zero Yeti 500X Your Next Power Station?

Earlier this year at CES, we learned about Goal Zero’s plan to release several new power stations, also known as solar generators, in 2020.

The first one out was the Yeti 200X, which is one of the smallest products we’ve seen from Goal Zero. Now, the second one has been released, and it’s called the Yeti 500X.

Let’s take a look at what the Yeti 500X has to offer, what solar panels it’s compatible with, and what the best alternatives to it are. 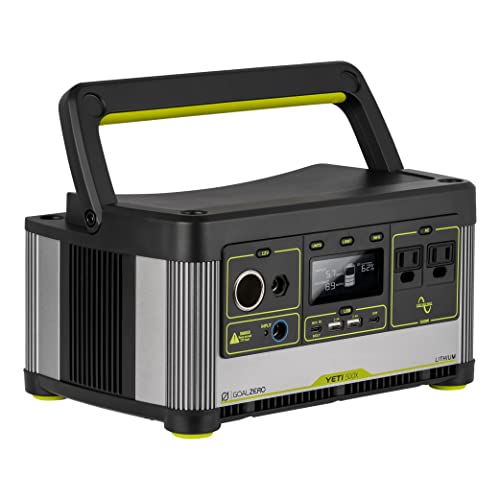 Goal Zero has finally started putting MPPT charge controllers in their portable power stations. This will let you plug solar panels in and have them charge the Yeti at a faster rate than with the old PWM charge controllers.

MPPT is especially helpful in bad sun conditions, like early mornings and late evenings when the sun is low on the horizon. It’s also more efficient when it’s cloudy.

Another feature I would like to see on more power stations is the USB C PD port that works as both an input and output. So you will not only be able to charge new laptops like the latest Macbook via USB C, but also plug a USB C charger into the Yeti to recharge the battery inside the power station.

Pair the USB C input with the 8mm input, and you’ll be able to input 180W to recharge the Yeti 500X in about three hours. 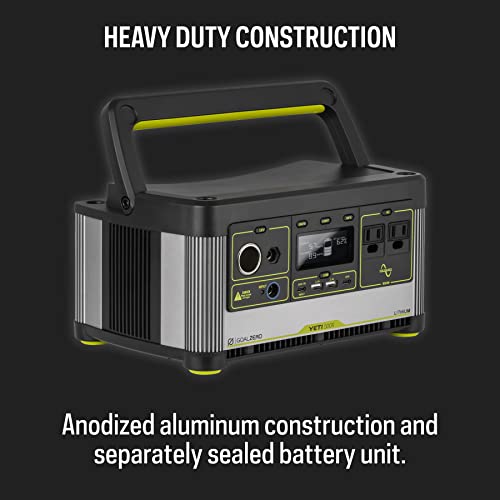 The screen on the Yeti 500X is the same one we’ve seen on earlier Yeti’s. It shows input/output watts, output amps, battery voltage, battery percentage in both percentage and bars, and time to full/empty.

Related Post: Can You Replace The Battery In A Goal Zero Yeti Lithium?

What this means is that you can power a 50W device for about 10 hours. The inverter isn’t 100% efficient though so you should expect a 10% loss or 9 hours with the 50W device.

As mentioned above, it has an MPPT charge controller. There is still the 22V “Goal Zero limit”, so you can’t use a lot of panels larger than 100W since their VOC rating usually exceeds 22V.

Still, I have to give cred to Goal Zero for finally putting MPPT charge controllers in power stations this size. It’s unacceptable to release a new solar generator in 2020 with a PWM charge controller.

I like that they put two ports on it instead of one. Some manufacturers fail to do this on power stations this size, but with a 300W inverter, I want to be able to power more than one device at once without having to use a power strip.

The USB C PD port is capable of inputting/outputting 60W. If you would only charge the battery with a USB C power adapter, it would take almost nine hours. 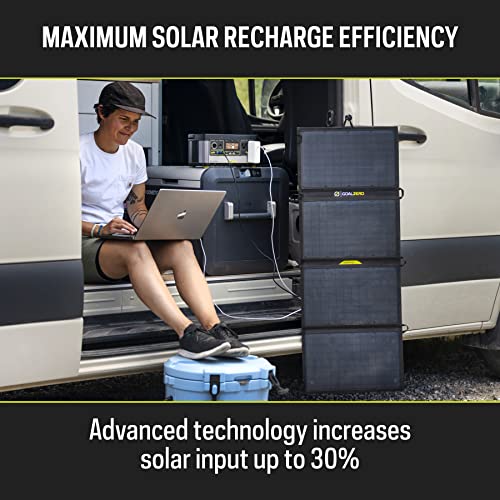 I am a little bit disappointed that the inverter in this unit is rated at 300W/600W peak. I wish it would’ve had a 1000W/2000W peak inverter so you could power a coffee maker, toaster, and plug an RV into it.

With a 300W limit, you can barely power a large TV and a gaming console like the PS4 Pro.

The Yeti 500X is a portable power station, no doubt about it. Its folding handle on top is easy to fold up and carry around, and easy to store since the handle lays down flat.

At 12.9 pounds, it’s heavier than the similar Rockpals 500W but slightly lighter than the Jackery Explorer 500. Both those have a 500W inverter versus Yeti’s 300W.

Although it won’t max the input of the Yeti 500X, the Goal Zero Boulder 100 Briefcase is a good panel to pair it with. It will plug straight into the Yeti with its 8mm cable.

Other panels with 8mm connectors are compatible as well, like the Paxcess 50W, No products found., Rockpals 100W, and Jackery SolarSaga 100W.

Related Post: How To Use Third Party Solar Panels With Goal Zero Yeti

You can use third party panels like the Renogy 100W, HQST 100W, Newpowa 100W, and Eco-Worthy 120W, but then you’ll need an adapter like this (click to view on Amazon).

You can also connect two MC4 solar panels in parallel with an MC4 Y Branch. Take the positive wire from both panels and connect them to the MC4 females on one of the adapters, then do the same thing with the negative wires, and finally connect the single MC4 male and female connectors on the end of the adapters to the MC4 to 8mm adapter.

Just make sure the VOC rating of the solar panel you’re considering is below 22V, and that it doesn’t have a solar charge controller built-in since the Yeti has one already.

Goal Zero only includes the wall charger in the box.

The car charger can be purchased separately.

Goal Zero is a great company located in Utah. They offer a 1-year manufacturer warranty and are a phone call away from helping you with any questions you might have about their products.

How Long Will The Yeti 500X Power My Device?

If you know how many watts your device uses, divide the battery capacity of the Yeti with that number. The Yeti 500X has 505 watt-hours.

When you plug a device into the Yeti 500X, its screen will tell you how many hours it will be able to power the device(s).

If you have no idea how many watts your devices use, I recommend getting a Kill A Watt that you’ll plug into a wall outlet, then plug your device into and it will tell you exactly how much it’s drawing.

How Many Years Do A Power Station Like The Yeti 500X Last?

You can make your batteries last longer by not discharging the Yeti below 10-20% or above 80%. If you stay within 20-80%, I have no doubt that it will last twice as many cycles.

Can The Yeti 500X Be Used In Freezing Temperatures?

Goal Zero advertises that the Yeti 500X’s operating temperatures are 32-104 F (0-40 C), so it should not be used in any way in freezing temperatures.

How Long Does It Take To Charge The Yeti 500X With The Wall Charger?

It takes about 8.5 hours to charge with the included 60W AC charger.

How Long Will It Take To Charge With Solar Panels?

It depends on how powerful the solar panel is and if it’s sunny or not.

The Boulder 100 will generate between 60-80 watts to the Yeti, and charge it from 0-100% in about 8 hours of good sun. You can see how many watts the solar panel is bringing into the Yeti on the screen.

Yes, you can use the Goal Zero Car Charger in a vehicle. It has two settings, and will charge the Yeti from empty to full in 4.5 hours on the highest setting.