Which One Should You Buy – The Jackery Explorer 160 or Explorer 240?

So you’re trying to decide between the Jackery Explorer 160 and Explorer 240, and I understand that it can be a hard choice. It’s hard to say which one is better because it depends on what you’re looking for in a portable power station.

In this post, I am going to do my best to make the differences between the two as clear as possible, and hopefully help you decide. Both of them are great portable lithium batteries that will keep small devices charged while camping or during a power outage.

Note that Jackery also makes and sells the larger Jackery Explorer 500, and Explorer 1000. But that’s a comparison for another day.

I like to start my comparisons with a comparison table that lists the most important features of a portable power station like these, so let’s do that now. 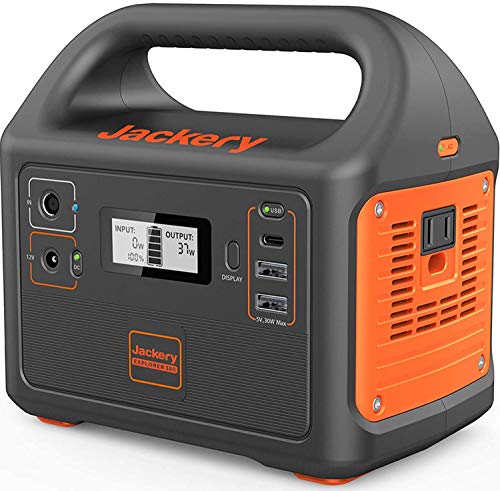 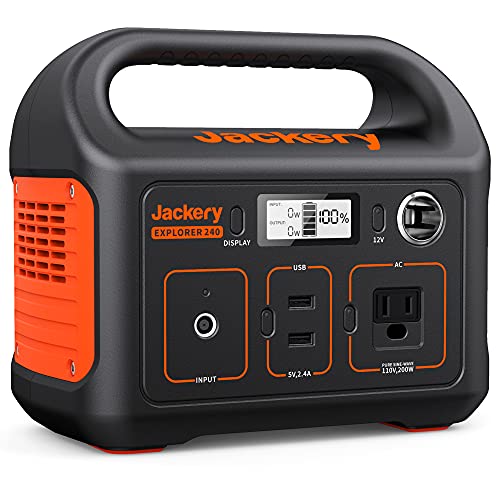 The Differences And Why They Matter

I decided I better mention this first because it’s interesting how Jackery has done this.

So, both the Explorer 160 and Explorer 240 can be used while charging, with one exception. The 12V output on the Explorer 160 shuts off when the battery is being charged, but the AC outlet and USB ports keep working just fine.

On the Explorer 240, every output can be used while also charging the battery.

The 35.8% increase in battery capacity might be worth it to some, although it results in a heavier power station.

The inverter rating matters since it decides how much electricity your electronics can pull out of the inverter at the most, in other words, how powerful the AC outlet is.

If you only plan on powering one small device at a time, like a smaller laptop, a CPAP machine, a light, or a charger, you will most likely never use more than 100W at a time. If you do, however, have a gaming laptop or several devices that you will be powering at the same time, you might need the Explorer 240 and the 200W limit.

You might have noticed that there is also a surge watt rating. The surge watt is how many watts the power station can output for a short amount of time, usually less than 30 seconds. Some devices have a surge watts when starting up, so it can be useful sometimes, although I don’t recommend relying on the surge watts.

Since both power stations are small and not meant to run large appliances, it won’t make a difference to most people, and the modified sine wave inverter will be fine powering small devices like phones, tablets, laptops, and lights.

The outputs and inputs are similar on the Explorer 160 and Explorer 240, but there are a couple of differences that might make it or break it for some.

First off, both have a single AC outlet, so you can only plug in one 110V device unless you use a power strip.

Second, the Explorer 160 has a USB C port capable of outputting up to 15W. The Explorer 240 is older and doesn’t have a USB C port. What they both have in common though are two USB A ports rated at 5V 2.4A, so you can charge smaller devices like phones, lights, and tablets at up to 12W via USB.

Third, the 12V DC output is different. They’re regulated on both power stations, but on the Explorer 160, you need to use the included DC to cigarette port lighter if you want to power devices you usually plug into the DC output in your car. Not a big deal, but it makes it slightly less convenient to carry an adapter.

On the Explorer 240, the DC output is a full cigarette lighter port so you don’t have to use an adapter.

Other than that, the ports are the same with an 8mm input on both that is used for charging. The input ports can handle up to 42W input.

Both power stations include a wall charger and a car charger. The Explorer 160 also includes the DC to cigarette lighter port adapter.

None of them include an adapter that lets you plug solar panels with MC4 connectors. If this is something you’re interested in doing, check out this post I wrote.

So Which One Is The Best?

Which power station is the best is hard to say without knowing your needs, but hopefully, the differences above will make it easier to decide.

Basically, the Jackery Explorer 160 is the more portable choice, with a smaller battery, a smaller inverter (modified sine wave), and a USB C port.

Meanwhile, the Jackery Explorer 240 has more battery capacity so you can power your devices for longer, a larger inverter so you can power more power-hungry devices or several smaller ones at the same time, a full-size 12V cigarette port output, and a pure sine wave inverter.

Neither one has faster charging, although the Explorer 160 will charge faster since it has less total battery capacity.

Best Solar Panels For The Explorer 160 And Explorer 240

The Explorer 160 and 240 has an 8mm input port, which makes it compatible with a lot of different portable solar panels on the market. Here are a couple of solar panels I recommend for the Jackery Explorer power stations.

Jackery SolarSaga 60W – Made by Jackery, this portable, and foldable 60W panel will be a great choice for either power station. On sunny days, it will max the input of the batteries and charge as efficiently as possible. It has a small stand, and two USB ports so you can plug devices directly into it.

Jackery SolarSaga 100W – The larger SolarSaga panel made by Jackery. Even though the Explorer 160 and 240 has a max input of 42W, a 100W can be a better choice than a 60W panel since it will be able to reach 42W in worse conditions. If it’s cloudy or raining, it will charge the batteries faster. It has a stand, and two USB ports, one being a USB C port.

Renogy 50W Solar panel with an MC4 to 8mm adapter – This is easy to set up, and the Renogy 50W panel is more durable than the foldable panels. I have Renogy panels that I leave out overnight, so you could even mount this onto a vehicle. For a larger panel, the Renogy 100W is a great choice.

Enkeeo 50W Solar panel – A great portable option with a stand and USB ports. Comes with several different DC connectors, one being the 8mm connector you’ll need to plug it into a Jackery Explorer power station.

No products found. – The Beaudens 166Wh uses lithium iron phosphate batteries that will last longer than the lithium-ion batteries used in most power stations. It has a 150W inverter, three USB ports, a screen, and a nice handle on top that makes it easy to carry.

Goal Zero Yeti 200X – The Goal Zero Yeti 200X (187Wh battery capacity) is a newer power station with a USB C PD port. It also has an AC outlet powered by a 120W inverter, four USB ports in total, and a regulated 12V cigarette port so you can run 12V fridges/freezers safely. A small screen tells you the battery percentage on the front. Capable of charging quickly via USB C PD or solar panels due to its MPPT charge controller.

What Devices Can The Jackery Explorer 160/240 Power?

Neither can power large gaming consoles, desktop computers (unless it has a 100W/200W or smaller power supply), coffee makers, or microwaves.

How Do I Know If It Can Power My Electronics?

You can usually find the wattage rating for a device on its charger or on the device itself. You can also Google “product name + energy usage”. I use a P3 Kill A Watt that tells me exactly how much electricity the device plugged into it is using.

I Need An Extension Cable For My Charger/Solar Panel

No, the inverters on these power stations are too small to power an RV. I have written a post that talks about the minimums for powering a camper, click here to read it.

2 thoughts on “Jackery Explorer 160 Vs Explorer 240, How They Compare”