Today I am going to focus on powering air conditioners with solar generators. Since I can’t go through every single power station and air conditioner out there, let’s talk a little bit about how you can figure it out by reading about the products.

What A Solar Generator Can And Can’t Do

Solar generators, also known as power stations are 12V batteries in a box with an inverter and a solar charge controller.

They’ve become increasingly popular as large lithium batteries have become more accessible. Lithium has a lot of pros and is lightweight compared to older types of deep cycle batteries, so they’re great for camping or any kind of traveler.

But what is a solar generator capable of? Can it power everything you need?

For RVers with 13,500/15,000 BTU ACs, the answer is most likely no. You can install an EasyStart on your AC which reduces the power the AC requires to start, but I would suggest buying a smaller portable AC or a window unit instead since it still might not be enough when the solar generator is powering other things in your camper as well.

There are portable units like the BLACK+DECKER BPACT08WT which is rated at 950 watts. With a power station like the Bluetti AC200P, you would be able to run the AC for almost two hours, or longer if you have solar panels recharging it at the same time.

How much power can a solar generator output?

The most limiting factor to how much a solar generator can power or output is the inverter rating. The inverter changes the battery’s DC power to AC and powers the standard AC outlets (just like the wall outlets in your home or RV). An inverter is only capable of outputting a certain amount of watts though, so this is why the inverter rating is relevant when you want to figure out whether it can operate a specific device or not.

Most lithium batteries are capable of discharging at a high rate, and therefore not limiting the power output like the inverter.

This can become a limiting factor even if the battery and the inverter in newer power stations are going to be capable of outputting higher watts. I bet 20A and 30A plugs will become more common in future solar generators.

When you look at a solar generator product description there are a lot of numbers to take in. As an example, let’s take a look at the popular power station Goal Zero Yeti 1400. 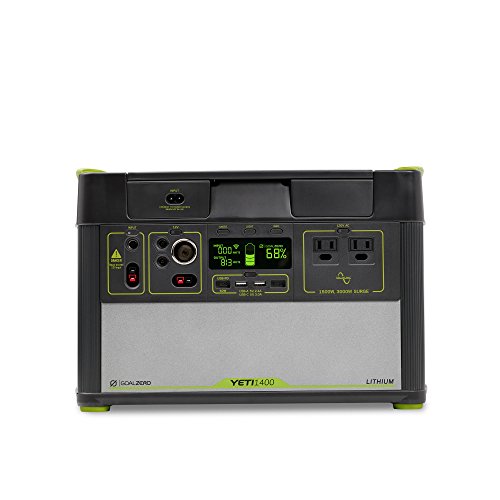 You’re told a lot of information just by reading the title of the listing.

Talking about Wh (watt hours) isn’t the most common one, but used with power stations since it makes it easy to compare the battery capacity in different power stations.

So which of the above is the one we care about when trying to figure out how much the Yeti 1400 can output? The last one, the AC inverter rating.

The AC inverter rating usually gives you two numbers, in this case, 1500W and 3000W. The latter is the surge watts, which isn’t as relevant as the first number. Surge/peak watts is how much the Yeti could output for a couple of seconds, but not continuously.

The first number is how much it can output continuously without shutting down.

What are the most popular solar generators inverters rated?

Here are a couple of popular power stations and their respective inverter rating.

How many watts do air conditioners use to start/run?

So now we know how to figure out how powerful the inverter is on a power station. Now we need to find out how many watts the air conditioner uses.

Here are some rough numbers on how many watts an air conditioner uses based on BTUs.

Each AC is different so the best thing to do is to read the manual, specification, or contact the company directly to figure out starting and running watts. These are just general average guidelines, and higher than what portable ACs or wall units usually require.

For example, a portable AC like the No products found. only requires 880 watts. So smaller portable air conditioners or window units would be able to run on the Yeti power station we looked at above.

The Bluetti would be able to run the BLACK+DECKER for almost two hours.

RV air conditioners (13,500/15,000 BTU) require a lot of power to start up and can’t be started with any portable power stations on the market right now unless you had an EasyStart installed on the AC unit.

It’s possible that it still wouldn’t run since other things in your camper would be using some energy, but maybe in 2021, we will see a larger solar generator with a 3000W inverter and a 30A plug that can run an RV AC.

Even If Possible, Is It a Good Idea to Run an Air Conditioner off of a Power Station?

If you manage to start an AC on a power station, it won’t run for very long before the battery has drained completely. It could be worth it if you need to cool down a room for 30 minutes, but it’s not something you would be able to run all day.

As an example, if you power a portable AC like the BLACK+DECKER BPACT08WT with a fully charged Yeti 3000 which has a 3024Wh battery.

The AC would run for about 2-2.5 hours. Sure, you could connect 700 watts of solar panels to the Yeti and extend the hours to 5-6 on a sunny day, but that would be a big investment to run an AC.

Whether that’s worth it or not is up to you, and I can see myself using one just to cool down a room on a hot summer evening.

If you have any questions, please leave a comment down below.

7 thoughts on “Can A Solar Generator/Power Station Run An Air Conditioner?”