We have seen a lot of portable lithium power stations or solar generators with AC outlets, but have you ever seen one that has a 30 amp outlet, compatible with RV campers out of the box? The inergy Apex is the first one I have seen.

The 30 amp plug will let you use the 30 amp cable you usually plug into the campground or your gas generator. There are also 6 regular AC outlets available on the inergy Apex, next to two USB A ports and two USB C PD ports. 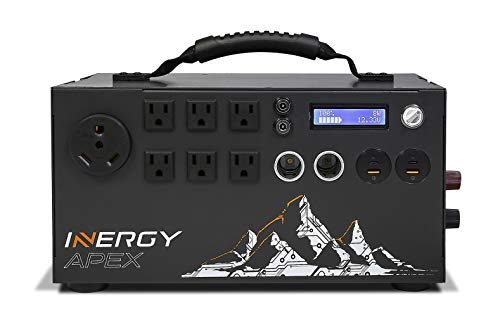 The Main Features of the inergy Apex

1100 watt hours and 15A AC outlets capable of outputting 1000W make it a great option for powering an off-grid home or camper.

Two USB C PD charging ports are rated at 5V 3A, which is pretty low for being a USB C PD port. There are also two regular USB A ports, rated at the same 5V 3A. 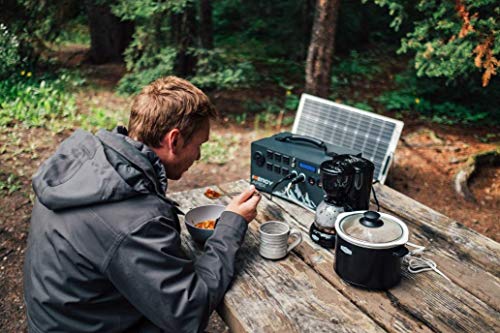 The RV plug is what sticks out on the Apex compared to other similar solar generators. Being able to plug your RV camper directly into it is a nice feature to have. This port maxes out at 12.5 amps (1500W) so it won’t run most air conditioners found on RVs, but it will handle everything else, including some microwaves.

A MPPT charge controller is built-in, making charging via solar panels an efficient way to charge the unit. It supports up to 500 watts of solar panels, making it possible to charge it from 0 to 100% in less than four hours.

With support for solar panels rated up to 26V VOC, and 30 amps, it can handle bigger panels than the Yeti which supports up to 22V. Panels like the Renogy 160W is rated at 22.9V and compatible with the Apex.

Is The inergy Apex The Best Solar Generator For RV Camping?

It is the first 30 amp lithium power station I have seen on the market, but that doesn’t automatically make it the best power station for RV camping in general. So what is good and not so good about it?

This has been criticized, and maybe fairly so depending on who you ask, it can be seen as slightly misleading, but if you’ve read the manual this is something you would know from the start. Since it’s in the manual, I can’t be too harsh about it.

I would bet most people won’t even come close to using 1000W at any time, especially not if you only plug it into an RV to charge the house batteries, your electronics, and watch TV.

So what are the pros with the inergy Apex solar generator?

The fact that it can handle large solar panels is a big pro that most other solar generators struggle with.

The inergy Apex is sold in different kits which includes solar panels and lights, making it easy for beginners to get into solar power and solar generators.

Inergy sells kits with either solid panels or flexible panels and you can choose how many panels you want. The more panels, the faster the Apex will recharge.

Can I Run My RV Air Conditioner With The inergy Apex?

Can I Plug a 50 Amp Fifth Wheel or Travel Trailer Into the Inergy Apex?

What Is A Power Station/Solar Generator?

A power station, also called a solar generator, is basically a box with 12V batteries, an inverter, and a solar charge controller. The inverter turns the 12V battery power into 120V, which can then be used with regular outlets put on the box. USB ports and 12V outputs are also common.

These portable boxes can usually be charged in several ways. Through regular AC wall outlets, 12 cigarette plugs in cars, and by solar panels.

They’ve become increasingly popular with people that spend a lot of time outdoors camping since they’re a gas-free solution that can take care of your power needs and be recharged with portable solar panels.

I own a refurbished Yeti 1000 power station which I plug straight into my travel trailer, paired with 400 watts of solar, and it covers about 90% of my energy needs. I only have to start up my gas generator when it’s cloudy for several days.

Solar generators need external solar panels in order to charge their batteries, so the name solar generator is somewhat misleading since it cannot generate energy on its own like a gas engine generator.

What Are The Best Alternatives To The inergy Apex?

Solar generators are becoming increasingly popular and there are lots of brands that are trying to gain market shares in the product category. There are a couple of high-quality solar generators that stick out that compare to the inergy Apex.

The Goal Zero Yeti 1400 has more battery capacity, a more capable pure sine wave inverter, faster USB-C ports, Wifi features that allow you to control and monitor the solar generator with an app on your phone, and can be charged with solar panels. It doesn’t include an MPPT charge controller which is sold separately. There is also a Yeti 1000. I have compared the two in a post that you can find here.

The Bluetti is one of the best solar generators on the market right now. If you don’t need to use more than 1000W at a time from the outlet, this is one to consider. It doesn’t have a 30 amp plug, but you could still plug it into an RV camper with a 15A to 30A adapter.

If you’ve looked into solar panels, you probably recognize the name Renogy. They sell a lot of solar panels, and have also created the Renogy Lycan which is very similar to the Yeti 1000. If you’re thinking about buying from Renogy, you can use my link to save 10% on your purchase*. Disclaimer: I earn a percentage on the sale, but it doesn’t cost extra for you. (*Excludes GEL/AGM batteries and sale items.)

A smaller option capable of a lot of the same things the bigger solar generators is the Jackery Explorer 500. It has a 518Wh battery, a 500W inverter, and enough ports for most camping needs. I wouldn’t plug it straight into my travel trailer, but its portability makes it very outdoor-friendly.

Let me know down below if you have any questions.