Which is the most powerful solar generator in 2022?

Portable power stations, also known as solar generators, are selling like butter in 2022.

People have realized that while they might be connected to grid power, power outages are becoming more and more common for different reasons.

One easy way to keep both your house and your family safe is to have a portable battery backup, like a power station.

Related Product: Looking for the most battery capacity and a kit that includes solar panels to keep you going? Check out this Yeti 6000X.

In this short article, I want to talk a little bit about what I see as the most powerful power station on the market right now.

The solar generator I am talking about is the EcoFlow Delta Pro. 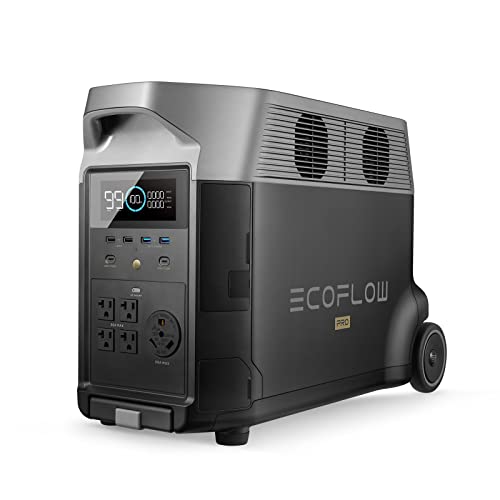 There are power stations with more battery capacity than this one, and I will talk more about that in the contender section.

I view this as the most powerful option right now due to all of the features combined.

I am also going to share a couple of different solar setups for the power station, and share some alternatives that are not quite as powerful but still great contenders.

This power station can output up to 30A, and be recharged with an EV (electric vehicle) charger.

Table of Contents hide
1 Which is the most powerful solar generator in 2022?
2 The Features Of The EcoFlow Delta Pro
3 The best alternatives
4 Frequently Asked Questions about power stations
4.1 Do they include solar panels?
4.2 Can I run an air conditioner and for how long?
4.3 Can I plug my RV/camper into it?
4.4 How long is it going to last in years?
4.5 Why is it better than a gas generator?
4.6 Are solar generators noisy?
4.7 Can I build my own solar generator?

The Features Of The EcoFlow Delta Pro

That means that you can run a 500W device for about six hours.

The inverter can output up to 3600W, which makes it one of the only power stations on the market that can power an RV air conditioner.

Remember that air conditioners and large refrigerators require a lot of power and will drain the battery quickly.

My favorite port on the Delta Pro is the 30A port, which makes it easy to plug in an RV camper. And since the inverter can output 30A, it’s a real 30A port.

There are also four 20A AC outlets, where you can plug in your regular electronics. If you need more outlets, this is where you would plug in a regular power strip.

Above those, we find six USB ports. Four USB A, and two USB C PD 100W ports. Those are capable of quickly charging your USB C devices and laptops.

You can control and monitor the Delta Pro with an app on your phone.

The power station connects to a current WiFi network, and can then be controlled no matter where you are. If you don’t have WiFi, it also works via Bluetooth.

Need more battery capacity? Then you can double or even triple the capacity with the EcoFlow Smart Extra Batteries.

If the battery is empty, you can recharge it 0-80% with the included AC wall charger in less than three hours. No other power station on the market can recharge this fast.

With the phone app, you can control how fast you want it to recharge.

Maybe you only have a 1000W generator and want to limit it, or you have more time to let it recharge slower which might be a good idea for the longevity of the battery.

How to keep the EcoFlow charged with solar panels

For the Delta Pro, I recommend the 160W model.

Since the max solar charging input is 1600W, and support voltages between 11-150V up to 15A, you can connect at least six of these panels in series.

EcoFlow includes an MC4 to DC adapter with the Delta Pro, so they’re all compatible right out of the box.

To connect two or more together, simply take the positive MC4 male connector from one panel and connect it to the negative MC4 female connector on your second panel.

This creates a series connection, which doubles the voltage but keeps the amps the same.

Then you can add more panels if you would like as long as the total voltage stays within the 11-150V range.

You’ll end up with a male connector from one panel, and a female from the other, and that’s what you connect to the adapter included with the power station.

Feel like the Delta Pro might be a little bit too much for your needs? Here are some other great options.

The Maxoak 2400Wh – Is the battery capacity more important to you than the AC inverter? If that’s the case, you might like this one that has 2400Wh and a 1000W inverter.

The Bluetti AC200P – A powerful and popular option. Lots of ports, a mix of lots of battery capacity and a powerful inverter with its 2000Wh and 2000W.

The EcoFlow Delta Max – Similar to both the Delta Mini and Delta Pro, and fits right in between the two. 2016Wh battery capacity, 2400W AC inverter, lots of ports. Another excellent choice, and this is what I use in my RV.

The Point Zero Energy Titan – Another very powerful solar generator that supports a lot of solar, expandability, and has a 30A outlet. 2200Wh battery capacity, 3000W inverter, 2 solar inputs. You can stack as many extra lithium batteries as you need, and it has a lot of ports.

Do they include solar panels?

No, unless clearly stated on the listing page of the product, solar generators do not include solar panels.

Can I run an air conditioner and for how long?

If you can run your AC with a 30A port, the Delta Pro can run it.

You should also consider the inverter efficiency, which usually is 85-90%.

Can I plug my RV/camper into it?

If your RV is 30A, you can plug it in like you would at an RV park or campground.

How long is it going to last in years?

That depends on how much you use it.

EcoFlow advertises that it’s going to last more than 6500 cycles, and I don’t think they mean until it’s completely dead.

Let’s say you use it for full-time RV camping, and go through a cycle every other day. Then it would last 35 years.

The best way to make sure it lasts as long as possible is to not discharge it too low.

It’s not going to hurt it directly by going to 0%, and it’s fine to do so with power stations. But it will do more damage in the long run than if you only go to 20%, then recharge it before it gets any lower.

Why is it better than a gas generator?

I wouldn’t say that a portable power station that uses lithium batteries is better than a gas generator, in general.

This is how I see it:

A gas generator is better when you need a lot of power for a long amount of time.

Nothing else comes close to gas in terms of the power efficiency, but a power station is quiet, can be recharged with solar, and doesn’t rely on a resource like gas that can be hard to come by in certain situations.

No. You’re going to hear it though when it’s charging or sometimes when the inverter is on.

What you’re going to hear is the built-in fans doing it’s job, trying to keep the components cool enough to be safe.

For that reason, you should never put the power station in an enclosed space or in direct sunshine.

If it gets too hot, it’s going to stop working temporarily and run the fans at the highest speeds.

Solar generators have a lot of different protections built-in, so you don’t need to worry about it getting too hot, but you should do what you can do prevent it from happening.

Can I build my own solar generator?

Of course, if you have the money, time, and knowledge, it’s easy. But I wouldn’t recommend it for anybody that doesn’t know what they’re doing.