The Goal Zero Yeti power stations come in lots of different sizes and configurations. Some of them are lead-acid batteries and other lithium. In an earlier post, I wrote about how you can double, even triple, the battery capacity of a Yeti 400 and Yeti 1250. Today I am going to help you increase the battery capacity of the Yeti Lithium models.

You can increase the battery capacity of the Yeti Lithium power stations that have an expansion module slot. Like the Yeti 1000, Yeti 1400, and Yeti 3000.

It’s also possible to connect a Yeti Tank Expansion battery to the Yeti 1250, by using the 1250 Ring Terminal Connector Cable. To do this, you’ll remove the lid of the Tank battery to install the ring terminal cable.

Now, let’s take a look at what you need to expand the battery capacity, and answer the most frequently asked questions.

To increase the battery capacity of a Yeti Lithium power station, you can connect Yeti Tank Expansion batteries. But in order to do so, you need a Yeti Link. Let’s take a closer look at each of them and how they work.

To connect a Yeti Tank battery to the Yeti power station, you’re going to need the Yeti Link Expansion Module. 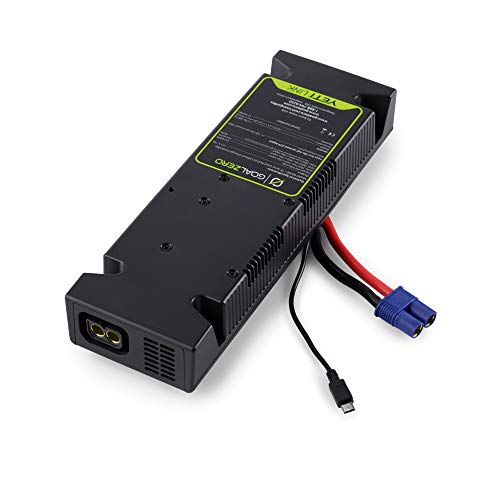 The Link Expansion Module is installed where the MPPT charge controller is already installed on the Yeti 3000, or in the empty expansion module slot on the Yeti 1000 and 1400. It’s very easy to install, you just have to remove a couple of plastic screws and connect two cables.

On the front of the Yeti Link, there is an 8mm input capable of inputting 150W to the Tank batteries or the Yeti. There is also a battery indicator with 4 LED lights, that show the state of charge of the Tank batteries with 25% increments.

On the back of the Yeti Link, there is an EC8 port which is where the Yeti Tank batteries are connected.

One Yeti Tank expansion battery holds a 12V battery rated at 100A, which means that it holds 1200 watt-hours. The Yeti 1000 has 1045 watt-hours of battery capacity, so it will more than double the capacity with one expansion battery.

The way the Tank battery works together with the Link module is that it will charge the Yeti battery. 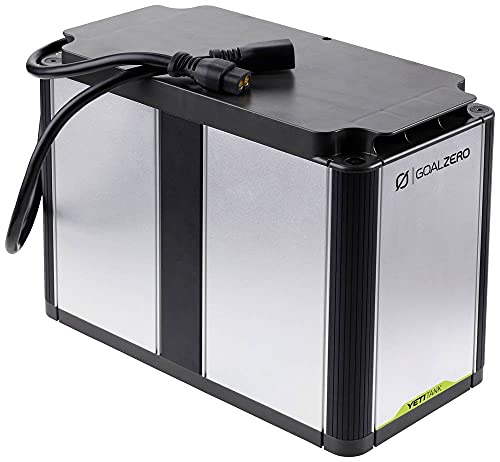 It’s also possible to buy a third-party PWM/MPPT charge controller and connect it directly to the Tank batteries.

The Yeti tank expansion battery is not a lithium battery but a deep-cycle AGM battery. You can add as many Tank batteries as you want since each battery has two in/out cables.

How To Connect The Battery To The Link Expansion Module

Connecting the battery to your Yeti is as easy as connecting a cable.

The Yeti Tank battery has two EC8 connectors coming out of it. One of them can be used to connect an additional Tank battery, and the other will be plugged into the back of the Yeti Link expansion module.

Goal Zero has made a video about the Yeti Link expansion kits that you can view down below. I recommend watching it to easily understand how it’s set up and works.

I have written a post that answers this question.

You can also connect a Tank expansion battery to the Yeti 1250 with a 1250 Ring Terminal Connector Cable. You’re going to have to remove the lid of the Tank battery to install the ring terminal cable.

How Many Input Watts Can The 8mm Port On The Yeti Link Handle?

It’s an 8mm input port capable of inputting 150W to the Yeti Tank battery/Yeti battery. Just like the other inputs on the Yeti Lithium power stations, it has a 22V limit.

Will The Screen On The Yeti Lithium Tell Me How Charged The Tank Batteries Are?

No, the screen on the Yeti Lithium only tells you the state of charge of the battery inside of the Yeti. The Yeti Link expansion module has a battery indicator made out of 4 lights with 25% increments to let you know how charged the Tank batteries are.

Note that it’s different from the Yeti 400/1250 non-lithium. If you chain batteries to those power stations, they become one large battery in the mind of the Yeti, and the state of charge percentage shown on the screen is based on both batteries that are chained together.

What Is The Maximum Number Of Tank Expansion Batteries I Can Connect?

Related Post: How To Use Third-Party Solar Panels With Goal Zero Yeti

The Tank expansion batteries can only be charged through the 8mm input on the Yeti Link expansion module, which has a maximum input rating of 150W. Unless you’re using it with a Yeti 1250, which will be chained to the Tank battery, and have the possibility to be recharged with the input on the Yeti.

Are The Tank Batteries Waterproof?

Are There Extension Cables?

Yes, No products found. so you can create a longer cable between the Yeti Link and the Tank battery.

Can You Replace The Battery In A Yeti Tank?

Yes, since it uses a 12V 100Ah deep-cycle lead-acid sealed AGM battery, you can replace it with one like it.

How Do I Use The Link Expansion Module In A Vehicle To Recharge My Yeti While Driving?

When it comes to how it’s installed, I recommend watching this video made by Goal Zero.

Does It Hurt The Tank Expansion Battery To Drain It To Empty?

The Yeti Link expansion module protects the Tank expansion battery from draining all the way down to a dangerous level by preventing the battery to go below 20% state of charge. So you don’t have to worry about permanently damaging the battery by draining them.

Please leave a comment down below if you have any questions and I will do my best to help you. Note that I don’t work for Goal Zero, so the best way to get an answer to a very specific question is to give them a call.