The Anker PowerCore 26800 PD is not a new power bank in 2020, but it’s one of the most popular power banks available on the market.

A big reason for that is its features. It has a couple of things that make it stick out, as we’ll see in today’s review.

Let’s take a look at the features of the PowerCore 26800 PD and why it’s worth talking about.

So what can a 26800mAh battery do? Well, the biggest iPhone available right now has a 3969mAh battery, so you could recharge the iPhone 11 Pro Max over 6 times. Not bad for a portable power bank. 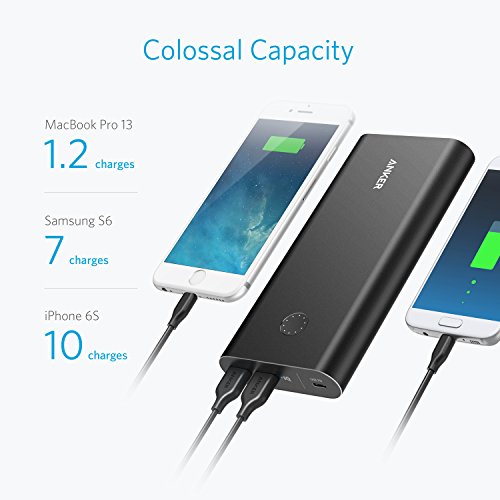 The USB ports are smart ports that can regulate the power depending on the device connected to it. Making it great not only for phones, but also for tablets, Nintendo Switch, and other USB powered devices.

One of my favorite features on the PowerCore is the LED power wheel. Push it once and small LEDs will let you know the state of charge. It’s not a small screen showing you a percentage, but still a quick way to see how charged it is.

Most power bank manufacturers struggle with this (in my opinion), and Anker’s solution is one that I like due to its simplicity and accuracy.

Anker’s MultiProtect Safety System protects your devices in case something would go wrong with the battery. 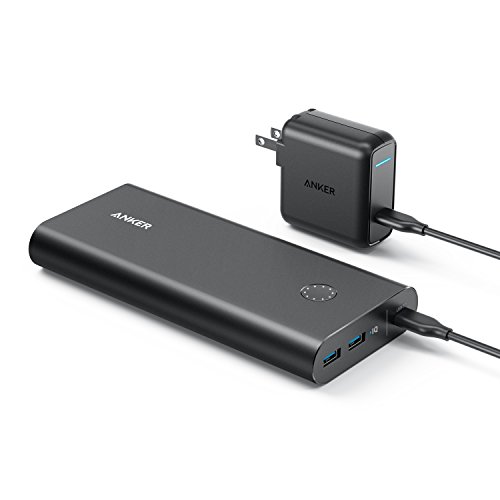 Inputs/Outputs Found On The PowerCore+ 26800 PD

It has two smart USB ports, which Anker calls the PowerIQ feature. These ports can provide larger devices like tablets and a Nintendo Switch with more power as needed.

These USB A ports are 5V/3a each, which means they can output up to 15 watts. Both these ports can be used at the same time to charge more than one device.

In addition to the regular USB ports, it has a USB C port capable of outputting up to 30 watts, making it a great power bank to charge a more power-hungry device like the Nintendo Switch, and an iPad Pro.

The USB C input can also charge the power bank in less than five hours with the included USB C wall charger, which is impressive. I like not only the charging speed but the fact that Anker includes the fast wall charger.

Note that the PowerCore doesn’t allow pass-through charging, meaning you can’t charge a device through one of the USB ports while the battery itself is charging.

You can charge the PowerCore+ 26800 with a solar panel through USB. I recommend a portable panel like the BigBlue 24W Solar Panel Charger.

All you would need then is a USB-A to USB-C cable so you can plug the solar panel into the USB-C input on the PowerCore.

What’s Included In The Box?

Included in the box you’ll find the 30W USB-C wall charger, a micro USB cable, a USB-C to USB-C cable, and a travel pouch. Note that no lightning cable is included.

I have to give Anker a huge plus for including the fast wall charger. It would’ve been nice to see a USB-C to USB-A included as well so it would connect to portable solar panels easier, but it’s alright.

The Anker PowerCore+ 26800 PD is the power bank to beat, even in 2020. It can be brought on planes, charge your devices several times, and recharge quickly with the included wall adapter.

It doesn’t have a small LCD screen indicating how charged the battery is, but it’s still better than most power banks since it has circles that light up when you push the LED power wheel to let you know the state of charge.

Alternative Power Banks On The Market

One alternative that sticks out is the Powkey AC Power Bank which has a 88Wh battery and an AC outlet. You can plug electronics straight into the outlet as long as they don’t draw more than 65 watts. It’s airplane friendly, lightweight at 1.14 lbs, and comes with both a wall charger and a car charger.

Last but not least, the AINOPE 10,000mAh PD USB-C power bank is a very small neat little power bank capable of a lot of things the bigger banks do, plus some that they don’t. Starting with the little LCD indicator showing the battery percentage.

It also maxes out at 18W output through USB-C and is capable of fast charging. It includes both a USB-C to USB-C cable and a USB-A to USB-C cable, making it a perfect buddy for a BigBlue 24W Solar Panel. It doesn’t include a USB-C wall charger though. Extremely impressive for its size, maybe two of these would suit you better than one big power bank?

How do you charge an Anker power bank?

When using the included USB-C wall charger, the PowerCore+ 26800 PD recharges in less than 5 hours.

Can the PowerCore+ 26800 PD charge the Nintendo Switch?

Yes, it can. It won’t, however, charge the Nintendo Switch if it’s connected via HDMI to a TV.

What is USB-C PD?

PD stands for Power Delivery and is a new specification for handling higher power to allow different devices to charge quickly over a USB connection.